From Wikipedia, the free encyclopedia

Trainz is a series of 3D train simulator video games. The Australian studio Auran (since 2007 N3V Games) released the first game in 2001.

The simulators consist of route and session editors called Surveyor, and the Driver module, that loads a route and lets the player operate and watch the trains run, either in « DCC » mode, which simulates a bare-bones Digital Command Control (DCC) system for the simple stop-and-go of a basic model railway, or « CAB » mode, which simulates real-world physics and adds working cab controls. 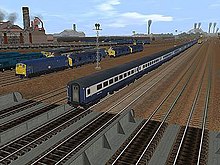 In the route editor, Surveyor, the user can shape the landscape, paint with ground textures, lay tracks, and place buildings and roads. The user then operates the trains in Driver, either in free play, or according to a scenario called a Driver Session (previously called Scenarios in the early versions of Trainz, Ultimate Trainz Collection, and TRS2004) which can range in difficulty from beginner to expert. In CAB (cabin) mode the train physics are more sophisticated than in DCC mode; adding real-life considerations such as wheel slip on the rails; how the weight of the consist slows acceleration and deceleration. Any train can be given directions to be driven by the computer.

The simulators are supported by a large library of freeware assets which can be downloaded from the N3V servers, referred to as Download Station (DLS). PaintShed is a simple program for aiding and easing the process of ‘reskinning’ traincars, altering their livery, by recoloring and adding new heraldry to Trainz locomotives and other rolling stock. The Content Manager (CM) module is a Windows program that allows management of the in-game data base files. It was renamed under the name of Content Manager Plus (CMP) in TRS2006.

While little-to-no information is known about this version of Trainz, it originally started life as a set of downloadable files in 2000.

Trainz 0.9 was the CD-ROM beta that was mailed to testers by Auran. Like the file set, nothing is known about this beta of Trainz.

Trainz Community Edition was released in December 2001. Service packs 1 (April), 2 (June) and 3 (November) were each released in 2002, these progressively updated the Community Edition, Trainz 1.0 to versions 1.1, 1.2, and 1.3 successively. Two retail builds (retail versions releases) existed; the English/USA version is commonly known as Trainz 1.0. (Box, which included Gmax as an accessory is shown at right in lower left corner.)

The Ultimate Trainz Collection, or UTC, was released on 26 November 2002 in North America as a 3-CD set including extra rolling stock, and a CD-ROM with TrainzScript-based scenarios and route map content based on Trainz 1.3 tech. This was the first edition to include the formerly separately retailed PaintShed program and support RailDriver,[1] as well as the first incorporating Trainz user developed freeware content as part of the release, some of which became Trainz staple content in TRS2004 et al. through current releases.

Trainz Railroad Simulator 2004 was the first version of Trainz to include interactive industries and loadable rolling stock capabilities, which allow the player to deliver various resources (such as coal, wood, and steel) and passengers to various industries and stations across the playable area. There were many industries included and much of the bundled rolling stock was updated to include this new dynamic loading and unloading animated capability with a corresponding load-state dynamic driving physics change in the handling of a consist. It was also the first version of the Trainz series to have built-in steam engines.

Trainz Railroad Simulator 2004 Deluxe was a later 4 CDROM follow on with the first two service packs pre-installed. It also included PaintShed, and a bonus content CD.

This edition was also the first to support downloadable fan-made content, such as characters, buildings and scenery from the popular Thomas & Friends franchise.

Trainz Railway Simulator 2006 (known as Trainz Railroad Simulator 2006 in the USA), or TRS2006, was a transitional release, incorporating the stable Auran JET based TRS2004 GUI modules with only some graphics improvements, but introducing the data base manager Content Manager Plus (CMP) as a new core technology. ContentManager.exe (now called just CM) combines data base management, and secure FTP upload and download facilities and special user definable filters all in one integrated system. By defining a good filter, the user could ‘selectively not see’ the clutter of regional items in the Surveyor asset selection menus saving user time when world building. This important filtering feature was further improved in Trainz 2009, becoming far more powerful and easier to use. In addition to these improvements, several new routes were included, such as Hawes Junction (representing a small section of the Settle and Carlisle Railway and serving as a demo for TC3), Toronto Rail Lands 1954 (representing Toronto’s sprawling railyard in 1954), and Marias Pass Approach (representing the BNSF Marias Pass line between Shelby, Montana and Cut Bank, Montana and serving as a demo for the full Marias Pass payware route). TRS2006 was published in September 2005, and the base release with its single service pack formed the core of the regional releases (most are joint ventures with ‘Trainz Partners’ combining payware content provider’s products with the base Trainz software) over the next four years until the introduction of new technologies in TC3 and TRS2009. In Germany, it was published by Bluesky-Interactive, as ProTrain Perfect.[citation needed]

Trainz Driver (also known as Trainz Driver Edition (TDE) in the USA) is a version of Trainz Railroad Simulator 2006 released in 2005 lacking the Content Manager and Surveyor GUI world building module, having only the Driver and Railyard modules. Note this is precisely the formula utilized with the 2011-2016 release of iPhone and iPad based Trainz releases, as well as the new ‘Driver 2016′.[2]

Trainz Railroad Simulator 2007 (abbreviated as TRS2007) was the second release targeting a regional market distributed by Anuman Interactive for sale in France, Belgium and Switzerland.[6] There were initially two versions: the standard version which consisted of Trainz Railroad Simulator 2006 with Service Pack 1 applied, and the Gold edition, which included French regional add-on items.[7]

TC1 focuses on the Metro-North Railroad’s Harlem Line in the 2000s (due to EMD FL9 locomotives still being in service), TC2 focuses on a freelanced city called « Modula City », featuring European trams running in the city and to an island (a demo version was included with TRS2004). TC3 focuses on the famed Settle-Carlisle Line from Skipton to Carlisle in the late 1950s/early 1960s during the steam-diesel transition.

Demos of Modula City and the Settle-Carlisle line were included in TRS2006, along with a limited amount of content in unrefined states.

Released in 2008, Trainz Simulator 2009 now has improved Surveyor capabilities and a new skin; the version contains the first actual software game engine advances that harnessed the increased RAM and video card memory asset utilizations and was the TS2009/10 also support the new specs, additionally they support DXT graphic compression transparently, and multi-core processors which the earlier versions did not. When running under a 64 bit operating system these programs can use 4 gigs of memory, TC3 and earlier versions are limited to 2 gigs of memory

TS2010 now has improved graphics capabilities and Speedtree technology with a new skin variant. TS2010-SP2 introduced the use of 64 bit processing while retaining a compatibility mode with older 32 bit computer architectures.

To celebrate the 10th anniversary of Trainz, N3V Games released a Trainz app for the iPad on December 4, 2010. Users can lay tracks, drive trains. Users have access to Driver and Surveyor and can create routes and drive trains with the help of tutorials. An Android version of the game was released on 22 July 2011 and has the same features as the iPad version. The app is a port of Trainz Simulator 2009.

Trainz Simulator 12, or TS12, was released on April 12, 2011. Among other upgrades, this product offers a variety of new routes, doppler effect support, satellite view, and a multiplayer feature for the first time (multiplayer was publicly tested in TS2010). A Trainz 10th Anniversary Boxset was announced which includes the game and other extras. The game was initially released for pre-order on March 18, 2011 as part of the limited-edition Trainz 10th Anniversary Collector’s Edition. A certain amount of content from previous versions was removed from this release, making it the first release since Trainz 1.0 to feature all and only new routes and related assets. Like most Trainz releases, the package contains only content vetted for the new technology, which in TS12 needed to be updated for compatibility with 64 bit computers. However, much of the content (not all of it) from the previous versions was released on the Download station (DLC) in an updated form as of the end of 2012 under an initiative known as the « Download Station Cleanup ».

My First Trainz Set was designed for the younger generation who do not want to worry about realism or management when playing the Trainz game. The game features 4 locations to lay track in that are based on rooms throughout a house, such as a bedroom or kitchen. The user has the ability to place down small toy-like objects in the replacement of buildings and scenery. However, its graphical quality of the trains, track, and objects is still very much like that of the standard Trainz simulator games. Controls are also far more simplified. The game was also ported to Android devices.

Trainz Driver leveraged the work done porting Trainz Simulator onto iPad and brought the driving aspect of the Trainz franchise to mobile phones for the first time.

Trainz Simulator 2 Mac was released on March 27, 2014 via the Mac App Store, which amongst other things, introduced an online multiplayer feature. It is a port of Trainz 12.

Trainz Driver 2 leveraged the iPad updates and introduced the powerful route editing tools to the phone. It has TS2009’s game engine built into it.

Trainz: A New Era is, as noted in the new naming convention, a new beginning for the Trainz franchise. In November 2013, a Kickstarter campaign for the game was launched to help fund the game and the new purpose-built game engine. The campaign reached its target funding level a month later. Contributors were awarded prizes ranging from desktop wallpapers, First Class Tickets for the Download Station, full copies of the game, and various additional content depending on the amount pledged.

On May 11, 2018, N3V Games announced a new version of Trainz featuring better graphics, Physically-Based Rendering, Parallax Occlusion Mapping[13] and more content than ever before.[14] Early Access was made in July 2018 and the game was officially launched January 7, 2019. It is also the first entry in the series since TRS2006 to feature the « Trainz Railroad Simulator » moniker. Possibly to avoid confusion with « Train Simulator » by Dovetail Games. The game uses whole-game DRM[15] in all versions, whereas certain versions of Trainz: A New Era could be purchased and run offline. This requires that the game is connected to the internet at least once a month in order for the game and content to continue functioning. TRS19 is primarily being offered as subscription model, although a one-time purchase (but with the monthly DRM check still required) is also available via the Trainz Store and Steam. It also has the ability to download content from the Download Station (DLS) while in the game. 2019 saw the release of regional versions, with content specific to certain parts of the world:

The desktop cab controller RailDriver was first supported for use in Service Pack 1 for the Ultimate Trainz Collection, and is also supported by all subsequent Trainz releases.[16]

Trainz was a runner-up for GameSpot‘s annual « Best Simulation on PC » award, which went to Flanker 2.5.[30]